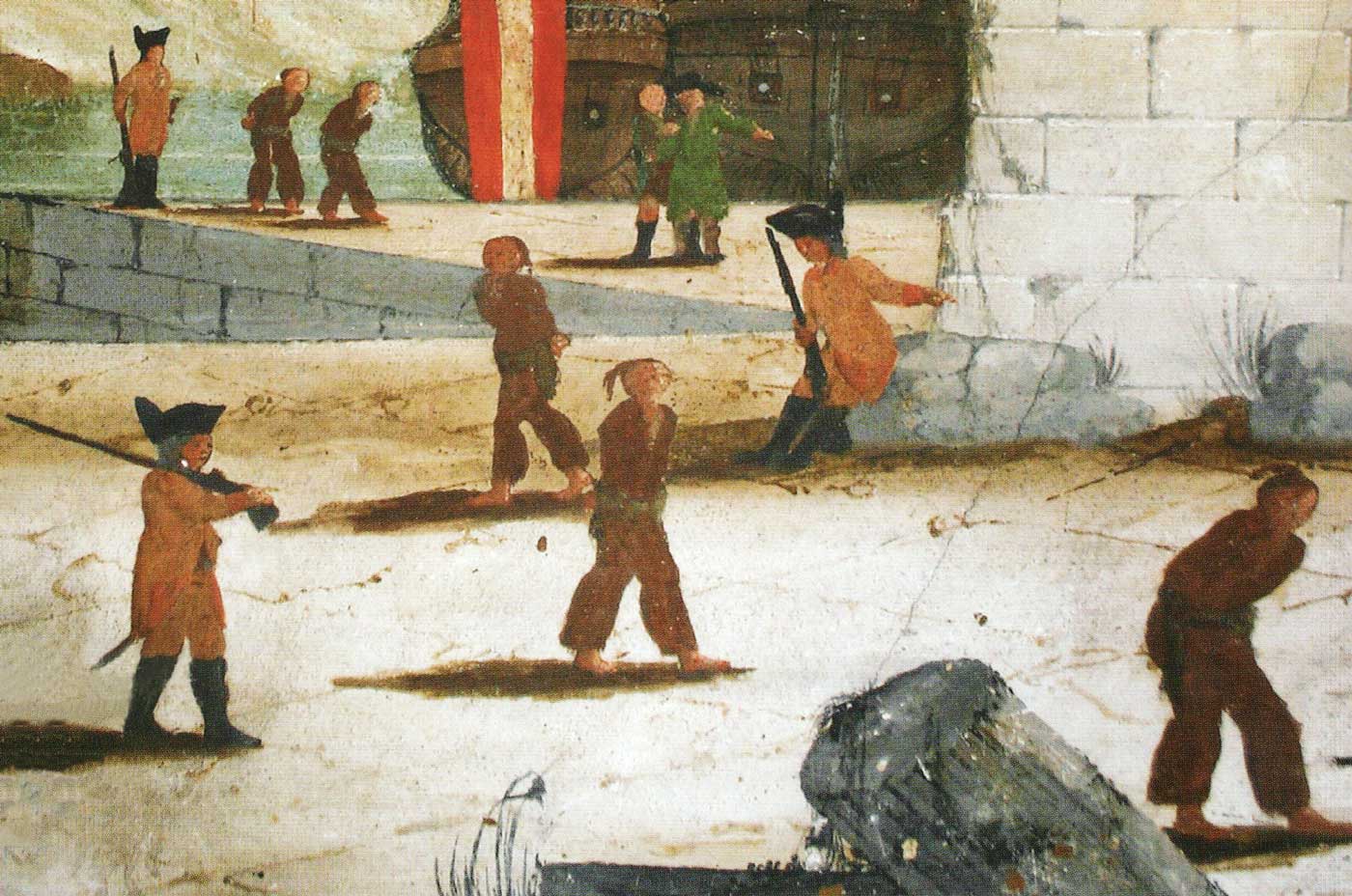 The four wall paintings Vedute ideale are located in the small hall of the administrative building of the Privileged Company of Trieste and Rijeka. They were painted for the highly ranked administrators and co-owners of the company – Dutch and Belgian industrialists, after the renovation of the administration building in the late 18th century. The company was founded on the request of, and with the support of the Austrian Crown, and its key task was to refine raw sugar, and distribute secondary products on the international market. The authors of these paintings are unknown, but according to Ervin Dobrović, “they should be found among the Venetians in Piranesi’s or Canaletto’s social circle”. Vedute ideale are not an example of especially significant works of art. They are standard decorative paintings which were “as certain other wall paintings of that time, probably based on vedutas from some as yet unknown etchings.”

These paintings are ornaments of the social circle for which they were created, yet also a possible key opening up discussion on the division of labour in the production processes of the company, and its involvement in the colonial exploitation of resources and the workforce. In modern texts that historicize the company’s actions through a national paradigm, we are informed of the grand importance of the “first” and the “most successful” company of that kind in the Austro-Hungarian Empire, while on the other hand, when dealing with the division of labour, these very texts emphasize the exploitation of the local population, who held low-end jobs in the hierarchy. But if trade and sugar refinement are global industries based on forced slave-labour, then this dislocated exploitation is missing from the story.

Fantastic scenes of faraway cities depicted on the vedutas are populated by “Asians” and “Europeans”, even though we know as a fact that the Company did not trade with the Far East. Since it had no colonies of its own, the Austro-Hungarian Empire procured raw sugar via a proxy from London, Venice or Marseilles, having been imported there from American and African colonies. The etchings that formed the templates for these vedutas perhaps point to the earlier exploitation of the Far East by some other great power. In these idealized vistas, the “Asiatic” characters, who were not painted as equals to the “Europeans”, can be seen as representing slave labour. Vedute ideale can best be understood as phantasmagorias of the colonial aspirations of the Privileged Company of Trieste and Rijeka, and of the Austrian Crown and its ambitions. In a roundabout way, they point to what has been suppressed in the texts – forced slave labour as a foundation of colonial expansion. Even though Austro-Hungary did not possess any overseas colonies, by relying on the refinement and importing of colonial merchandise, the industrial heritage of Austro-Hungary and Europe can be understood as colonial heritage.

Focus Group has been active since 2012. In its work, it tries to establish a critical framework for reading the artistic, economic and political surroundings in which it operates. It lends and learns from design, architecture, curatorship and writing, while often broadening its working team with collaborators from other fields. In 2015 the collective participated in the post-masters programme of the Bauhaus Foundation in Dessau, and in 2016 with the Künstlerhaus Büchsenhausen Scholarship, they developed a project seminar at the Innsbruck Institute for Architectural Theory. In 2016 they also exhibited the project Tales of Frames at MSU, Zagreb and at Fundació Antoni Tàpies, Barcelona. The project Invisible Matter was exhibited in 2017 at Bunkier Sztuki, Krakow, and in 2018 at Onomatopee, Eindhoven.